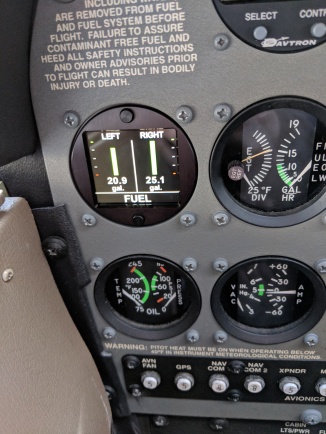 I can’t even explain how this could happen, though I’m told that it’s not entirely rare. The needle on the Rochester fuel gauge in N194SP fell off. Just…fell off. You can see it on the right gauge, hanging out at the bottom of the gauge as if it has not a care in the world. I was notified of this event by an email from Sally at WVFC on March 20 of this year. Little did I know that that would start a month-long, ridiculously expensive journey to fix this airworthiness item.

The plane was, of course, immediately grounded. There’s no flying without a fuel gauge. The email from Sally also indicated the standard fix: new Rochester fuel gauge. It also highlighted the Textron pricing: $3,400 for a new gauge. I did a double-take on that crazy number. Fortunately, I already knew that that was not going to happen.

If you’ve been reading the blog, you know that this isn’t my first go-around with flaky parts in the fuel measuring department. I have already done much research. I already had CiES fuel senders purchased from when the last time things had gone wrong ($800).  There wasn’t an opportunity to install them then, but I certainly wasn’t paying $3400 for a new crappy Rochester gauge, so it was time to bite the bullet and get new senders installed along with a new gauge.

Initially, I wanted a full engine monitor. However, that would have held the plane down for three months while parts arrived and work was done. The better choice was just to grab the fuel gauge specified for the CiES fuel senders: the Aerospace Logic FL202D. This gauge is not available from retailers, so it must be ordered directly from Aerospace Logic. A bit pricey that way: $875 full retail plus $123 FedEx Red shipping from Canada. FedEx screwed up and lost the invoice, so it got held up in customs. Aerospace Logic rescued the unit, but it did extend what should have been overnight shipping arriving on a Friday to a much longer arrival on Tuesday the next week.

Here came my first surprise. Once he saw the parts, Jasper at WVFC’s maintenance department refused the work. Outside his wheelhouse, he claimed, and asked me to find another shop to do the work. The first suggestion was my usual avionics shop, Aerial over at KRHV. With the plane unairworthy, that would have required a ferry permit. I wanted to explore local options first. FAA isn’t fun to deal with.

The next suggestion was Peninsula Avionics. The initial reaction from Art at Peninsula was promising. He interrupted his lunch plans to come to the airport and quote the work in the window I had available to meet with him. Sadly, this ended poorly. After a quick chat, Art took a peek at the plane in its tiedown to see the work to be done. On understanding the job, he turned his back and started walking away. I had to yell after him to understand what was happening. He was also refusing the job. It was pretty rude; I wasn’t happy.

That left Rossi. I won’t get into it here, but the rumors are that Rossi and WVFC have a rather contentious relationship. Neighbors, they run competing fuel services at KPAO. There was something about a fuel truck and plane damage and insurance: I don’t know; I wasn’t there. With a bit of trepidation, it was time to call them up.

They would take the work. A protracted quoting process ensued. Alberto Rossi got sick at the start, delaying things. On guidance from CiES, they quoted a longish 16 hours for this install. I wasn’t happy, but I didn’t have many options left. I signed the quote.

Well, it didn’t take two days. It took a week. The claim from Rossi is that the documentation for the fuel gauge from Aerospace Logic was insufficient, so they spent the time playing phone tag with their technical support. Scott Philiben of CiES eventually dug them out of their technical hole, as he was answering questions.

The plane, nearly a month later, was flying again. The shiny new digital gauge should be much more accurate and reliable.

Why am I finally posting on this? Well, I got the bill from Rossi today. It’s…high. 22 hours were charged, not 16. $300 in fuel was charged, as they disposed of the other fuel. The total bill from Rossi was $2750, bringing the actual cost of debacle up to $4600, not counting the lost time on the aircraft.